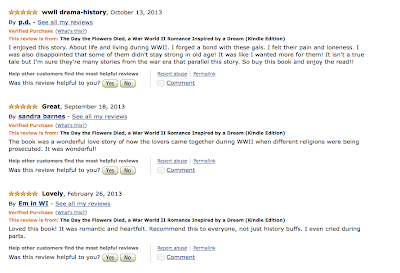 Posted by Amy Blackwelder at 1:08 PM No comments:

Even from the beginning, it was obvious to me how much research had been put in to this book and the way the story is told. You don't need to have read the comments at the beginning in order to discover this. The book also isn't the typical story of life in the camps and the focus isn't entirely on a couple torn apart by the events in a Nazi occupied area. The book is about the couple, that is true, but the focus is more on the change of mindset of the average citizen. Power is shifting in the government, people are starting to talk and believe what they hear. Prejudice is growing and that changes things. I also found the descriptions as moving as the events themselves and they continued evenly throughout the story, adding to what was being spoken, thought, or described. Because the quality of writing was just so beautiful and the story was overwhelmingly touching, I found that this was a difficult book to put down. Will the family survive? Will the couple find acceptance from their families? The end is heartbreaking, but keeps true to life as it was. This is a must read.
Posted by Amy Blackwelder at 7:47 AM No comments:

"The best love story ever."
Posted by Amy Blackwelder at 7:46 AM No comments:

It was a wonderful read! Probably wouldn't be considered a well written novel to most critics but it was a perfect love story for me, easy to read, couldn't put it down!
Posted by Amy Blackwelder at 7:45 AM No comments:

#1 in historical romance and fiction in 2012.
A historical fiction set in Munich, Germany in the early 1930’s before the outbreak of War World II. Eli Levin and Rebecca Baum fall passionately in love and while their differences should have separated them, they instead forged a passionate bond that would change their lives forever.